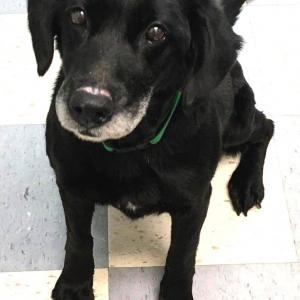 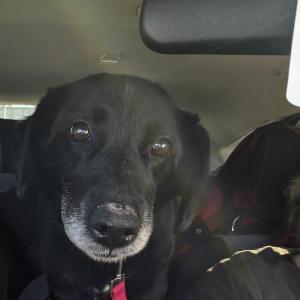 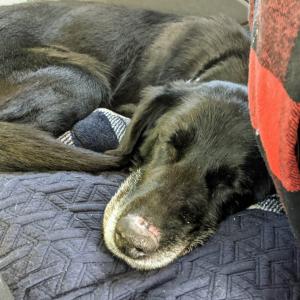 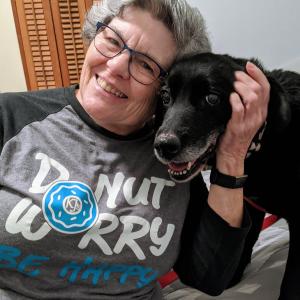 On February 8, 2020, Silver Linings Rescue was contacted by Janet Showley, the Executive Director of the Fulton County Animal Shelter. She was seeking rescue for a senior female dog named Tequila who had been kept as an outside dog most of her life. About 5 years prior her owner got in trouble for having too many dogs. They were allowed to keep Tequila and another dog for two more years. They were once again placed outside on chains with doghouses. On a follow-up inspection 2 years later, both were removed from the original owner. The first ten years of Tequila’s life had been spent outdoors on a chain without true human companionship. Tequila had come to Fulton unspayed with bad teeth and a tumor on her right back leg. The medical report said there was probable metastasis and she was placed in hospice care at the shelter. In Janet’s original message, she said her heart broke every passing day she was stuck in a kennel. Janet wasn’t sure how much time she had left, but she knew she deserved to spend it in a loving home. The first image in this album is the very first photo I saw of Tequila. When I looked at her, I saw what shall be referred to as “Abby Eyes.” The canine love of my life for 17 years was a dog named Aberline, a blonde pit mix. Aberline once won a dog trick contest by smiling on command, followed by an attempt to shake hands with the judge, which was just showing off at that point. I saw that hint of Aberline in her eyes and understood why Janet had championed for her. The rest of these photos were taken on February 21, 2020 when we drove her to Sullivan, Indiana, to meet her potential adopter, Linda.

Linda agreed to foster “Quila” for 30 days. SLR and Linda would also get another opinion on her health issues, so educated decisions could be made moving forward. SLR Board member Kathy George interviewed three potential homes for Tequila and Linda was by far the best match. Linda lost her 17-year-old dog Dallas and had been looking for a senior to adopt. Linda is a retired nurse who also happens to own a dog training school called Both Ends of the Leash in Sullivan, Indiana. Linda is an experienced dog trainer, and it didn’t take long before Quila was tracking Linda and waiting for cues. By the time we headed out, it was clear Quila knew who the boss was. I snapped one last picture of Linda and Quila before we left.

A few days later, I saw a post from Linda’s daughter on Facebook that said, “Mom lost her beloved companion Dallas late 2019. She adopted him as a senior, from The Humane Society of Sullivan County. She spoiled him rotten and he faithfully protected her for 8 years. Saturday, she met her new foster, senior Tequila, now affectionately called “Quila” (pronounced Keela). Mom will have her for 30 days and then has the option to continue fostering her. I whispered to Quila the day I met her, that I’d make a bet with her that Mom won’t take 30 days to sign those adoption papers. I don’t make bets I know I’ll lose, not even with a four-legged friend! Yesterday, while visiting with mom and Quila, Mom said, “I think she found her home.”

Later that month, Linda took her to see Dr. Staub at Honey Creek Animal Hospital in Terre Haute. He confirmed that the tumor was cancerous and estimated Quila had a year of life left. Linda sent us that message, and at the end, she said, “I’ll keep her as comfy as I can and keep you updated on her progress. Thank you so much for choosing me to foster her.” We decided then and there that we would have a party for Quila when her time came. Linda agreed and promised to keep us posted about her health. The updates came regularly, and in one she told us that she was falling in love with Quila and that she was quickly putting on weight- so much so that Linda had to cut her food back!

March came and the next update we received from Linda was that she was ready to sign the adoption papers. Honestly, Kathy and I knew she would come to that decision, but we had to let her make it in her own time. Linda said Quila was improving daily, that her coat was shiny and that she’s started to play with one of her toys. We cannot imagine Quila anywhere else than with Linda and feel honored to have been part of this girl’s journey to her forever home. A pandemic might have stopped us from getting the adoption papers signed, but we signed them on May 5, 2020. We think Cinco de Mayo is a perfect day to make her official adoption official!

As long as there are loving and caring homes for pets that have been left behind in their older years, none of us can truly rest. It doesn’t take much to change a life, Get in touch today and start making the difference.