I occasionally help with the rehoming of pets and received a call from my groomer asking if I could help two dogs whose owner, Sam, was going into hospice care at a Bloomington facility. My groomer asked if I could speak to Sam’s sister, Alice, who was making the arrangements for Sam and his estate, and attempting to find homes for a white poodle named Girlfriend and Oliver, a senior Shih Tzu. If I couldn’t help, both dogs were going to an animal shelter in just a few days.

I contacted a friend who manages a rescue just south of Chicago, and as the dogs were not bonded, she could place them, but in different homes. So, I called Sam’s sister Alice to find out more information and tell her what I could offer.

However, during our discussion, Alice had an unusual request: If Oliver passed before Sam, could I promise to give Oliver’s ashes to Sam, they could be buried together when Sam died? That touched my heart so I asked more questions.

Sam had gotten Oliver at six weeks old and Oliver never left Sam’s side. They did everything together and now, due to Sam’s failing health, they were being separated. Oliver was 15 to 16 yrs old, fairly healthy, but he had “crusty eyes” and didn’t like having them messed with – only his groomer was successful in cleaning his face.

The more I thought about it, the more I knew I needed to find a safe foster home locally so we could take Oliver to visit Sam. I felt they both needed to see each other through this final journey. I started networking and was told about Silver Linings Rescue later that night and told to speak with Rachel. Once we connected, I explained the need to keep Oliver in a home where he could be taken out to visit Sam until he passed. Once Rachel heard the story, she didn’t even pause, she just said, “Yes, absolutely we will help Oliver”. We set up a time to meet and transport Oliver to his new foster home.

Alice reported the groomer came a couple of days ago to bath Oliver and clean his eyes. He had not let anyone put in his eye medication since the cleaning and both eyes, especially the right one, was covered in a dried discharge that looked very painful. As Sam’s health had deteriorated so had his ability to care for Oliver’s eyes – and the neglect showed.

I tried to clean them myself, but true to form, Oliver wasn’t having it. So I decided to go ahead and meet with Rachel as planned at Culver’s parking lot. To say I wasn’t worried that she would change her mind when she saw him is a vast understatement. I had shared with her that his eyes looked terrible, but seeing it in person was a different matter entirely.

But when Rachel met him, she was warm, gentle and loving. Instead of saying “no” to Oliver, the sad little, crusty-eyed, senior Shih Tzu whose dad was dying, Rachel said “absolutely yes! Let’s get you fixed up and then go visit your dad.” – Kathy George 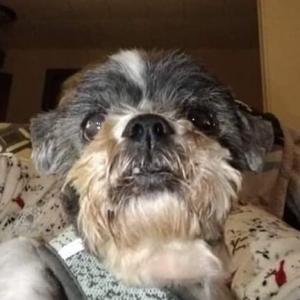 Kathy reached out to Silver Linings Rescue about Oliver the first week of December. I had never met Kathy, but could immediately tell she had a passion for helping animals. She explained the situation with Sam, and I felt that I should help in any way possible. I didn’t know where we were going to place Oliver but agreed that we needed to keep him local so he could visit Sam.

I posted on the Silver Linings Rescue (SLR) Facebook page and within the hour several people had volunteered to take him in. Unfortunately, many of these kind people weren’t comfortable taking in a dog with eye issues – and with an attitude about it. Then Whitney & Adam Webb of Peace of Mind Sanctuary (POMS) said they would be happy to foster him. After some discussion, he went to POMS on December 7, and within five days, Oliver had been to doggy day care AND slept in all of their kids’ beds! The Webbs also work at the Dog House, and they had taken Oliver to work with them for some socialization and to see what his behavior was like around other dogs.

Whitney was sending me regular updates, and I got this message from her: “Oliver has been to daycare for two days! He has been doing GREAT! The first day at daycare, I kept him in ‘low key’, which is for dogs who are injured, older dogs, or dogs who just need to ‘take a break’. Today he spent his time with a pack of small dogs, and he did great! He rotated with the pack, he allowed Pet Techs to pick him up and love on him, and he even went outside for potty breaks. Oliver has been doing SO well! We are so excited to have him adjust this well so fast. I have been able to wipe his eyes a couple of times with no issue, but if I take very long, he gets a little ‘tude … understandable. We are still giving him time!”

I was also in touch with Sam’s sister, Alice, and I had taken Oliver to visit Sam on December 23, 2019. Alice later told me that seeing Oliver brought Sam some much-needed peace. It was touching to see Sam’s face light up when Oliver and I walked in the room, and I hoped to take him as many times as possible before Sam passed away. We planned another visit after the holidays.

On Sunday, January 5, 2020, I got a text from Alice that Sam was entering the last stage of life. I knew I needed to get Oliver to Sam. I dropped everything, picked him up from POMs and headed to Alice and Sam. When we arrived, I picked Oliver up and placed him next to Sam. Oliver nudged Sam’s hand and laid next to him. Sam recognized that feeling and briefly opened his eyes to see his beloved dog one last time. Alice and I hugged, knowing it was probably the last time Sam would see Oliver. I returned Oliver to POMs and we received the news of Sam’s passing on Tuesday, January 7, 2020. Alice said it was so special to see Sam and Oliver briefly reunited and that she was so appreciative we made that happen. I was and am still honored to have been a part of it.

Oliver went back to POMs and seemed happy there, but we knew it wasn’t his final destination. Donna Dayton, SLR Board Secretary and Founder, asked around her office and found a woman named Marilyn who was interested in Oliver. She had some reservations, but Donna convinced Marilyn she should meet him in person and see how he got along with her other pets. Marilyn adopted Oliver at the end of January 2020. She reports that he is doing great, getting lots of treats, being spoiled rotten, and even allowing her to wipe his eyes occasionally.

Oliver is an excellent example of the human-animal connection. Sam seeing Oliver allowed him to pass peacefully and without worry that his beloved companion was in good hands. It was an honor to do this for both Sam and Oliver. I think Sam would agree that seeing Oliver bring joy to a new family is both a great ending and an exciting beginning. We at SLR intend to honor Sam’s wishes when Oliver’s time comes – once he passes, he will be cremated and his ashes reunited with Sam’s.

As long as there are loving and caring homes for pets that have been left behind in their older years, none of us can truly rest. It doesn’t take much to change a life, Get in touch today and start making the difference.